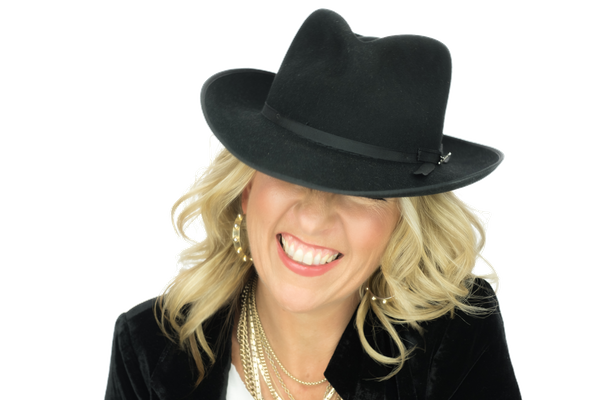 Ginger Leigh rocks out with the best of them; ax-swinging, sweatin', groovin', beltin' chanteuse. She can make your jaw drop like no other, ripping your heart out with anthem-style ballads. She can crack you up with her Ellen-style dry wit, her old-school-Bette stage antics, classy and crass. Once a fan described Ginger Leigh as "Like Adele with a Joan Jet kick in the ass."

She is a female-Elvis-like chanteuse. Ginger Leigh is a smart artist, a business woman, a fearless personality with her heart on her sleeve, a music-maker, a recording artist, a writer, an actress, a hostess and a stage-lover who goes unchallenged and who is uniquely made up of nothing but pure love, hard work, natural talent and unstoppable drive.

She manages to deliver her message about living outside of the box with contemporary powerful up-beat rhythms and melodies that come from her varied background and a family of 5 generations of professional musicians. Her career was kick-started as the lead-singer in her first professional performing band at the age of 9.

Leigh is prolific, driven, and generous. You will often find her assembling other musicians for causes, for her own concert-series “Love.” established in 2003, and for international touring in Europe, specifically based in Italy. Leigh has been emcee to countless events and fundraisers. Not only does Leigh work hard at promoting her own musical endeavors, but is also a published writer.

Leigh played the lead role as Maureen in Zach Scott's rendition of RENT and received rave reviews! Ginger Leigh also takes her performance and production ability and applies it to various small and large scale events. For 7 years, Ginger produced and hosted sophisticated parties surrounding Formula 1 and other races that come to the Circuit of the Americas in Austin.

A multi-preneur, Ginger has countless creative skills which include interior design, graphic design, business development and believe it or not, one of her passions is genealogical adoption research.

A true chameleon, Leigh appeals to a large demographic around the globe, with whom she stays in close contact via her studio releases, her writings, her mailers and blogs, while also receiving radio play and rave reviews in publications around the world.

While listening to Ginger Leigh’s records or while watching her passionate performance on stage, you hardly realize that much of her music is serious. She comes across with a lightness and ease, lifting you up! She is in constant celebration of life’s questions and struggles. Her music is empowering, thus allowing her to be a chameleon in the genre-based world of the music business. This she does with a piercing clarity, power and seduction as irresistible as the blue eyes with which she sings to you from stage.